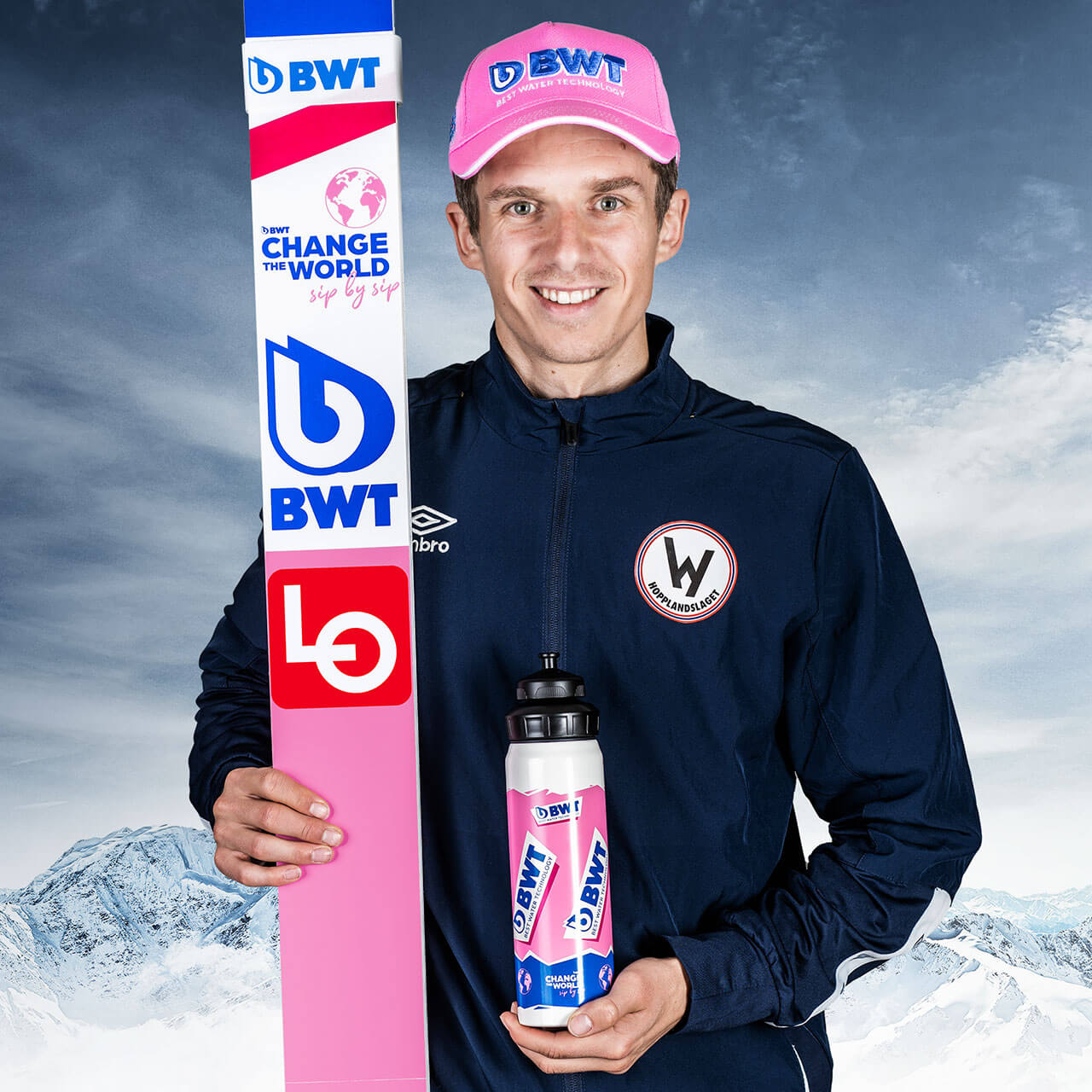 The sports family of the water treat­ment expert BWT continues to grow and welcomes the Norwe­gian ski jumper Halvor Egner Granerud, a top contender for this year‘s World Cup and 4-​Hills Tour victory.
.
Born in Oslo in 1996, Granerud came to ski jumping at an early age and since then has jumped contin­u­ously in the world‘s top ranks season after season. This season, he wants to build on his greatest success to date: in the 2020/21 season, he won the overall World Cup and thanks to his twelfth World Cup victory in November 2021, the like­able BWT newcomer has placed himself in the eternal best list as the best Norwe­gian. Even though time is tight besides training and compe­ti­tions, Granerud , who loves Italian cuisine, finds relax­ation in freestyle cooking. „Recipes are not for me,“ the Arsenal fan says with a wink.

From the 2022/23 winter season, the Norwe­gian will be jumping on BWT skis in PINK design and, in addi­tion to sporting aspects, will above all be trans­porting the BWT mission „Change the World - sip by sip“, which stands for sustain­able and healthy enjoy­ment of local, BWT miner­al­ized water. With the help of patented BWT filter tech­nology, water is miner­al­ized with magne­sium, zinc and sili­cate directly from the tap anywhere in the world. This elim­i­nates the use of dispos­able plastic bottles, their trans­port and the asso­ci­ated emis­sion of CO2 pollu­tants.

For Europe‘s leading water puri­fier BWT, which has just been named Sponsor of the Year by the marketing trade portal Hori­zont, coop­er­a­tion with successful athletes is an essen­tial building block for global brand devel­op­ment, which also includes the close coop­er­a­tion with Fischer Sports GmbH that has been in place for years. The part­ner­ship has been in place since 2017 and has resulted in the inno­v­a­tive pink jump skis that have become an inte­gral part of winter sports. „We have a lot in common with BWT in terms of tech­nolo­gies, inno­va­tions and quality stan­dards, and we are also happy to support the Change the World goals as part­ners. For example, our company site in Ried im Innkreis has been a BWT Bottle Free Zone for years and supplies all employees with BWT miner­al­ized water,“ says Franz Föttinger, Managing Director Fischer Sports GmbH.

„We are very excited about the part­ner­ship with Fischer, and we are espe­cially pleased to have this talented ski jumper as one of our new testi­mo­nials. He is an athlete who perfectly supports our mission and knows that by not using single-use plastic bottles and drinking local water, we can do a lot to protect our Planet Blue,“ said Lutz Hübner, CMO of BWT.